In 2018, we worked with an international consultancy aiming to enhance security sector performance in a fragile country in East Africa. The project’s implementation faced different challenges, most notably:

These two factors meant that there was a risk the project would enhance tensions between different governmental units, so the implementation needed to be planned and managed carefully in a context-sensitive manner to minimize risks.

All these issues were heightened by a high turnover in roles due to the political situation in the country - which meant that relationships built over months could be discarded overnight, changing the key players for strategic engagement and forcing the team to gain a better view of the situation as it evolved in real-time. 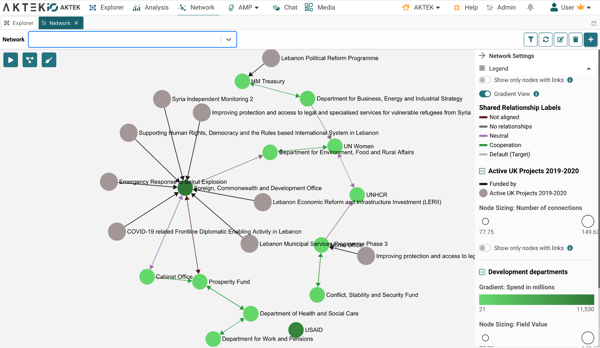 The organization needed to understand the stakeholders involved, their relations, and which areas they controlled. With such intricate networks, visualizations can help simplify the view for all involved.

We, therefore, provided them with the stakeholder mapping capabilities of AKTEK iO, so they could more easily map power dynamics, which allowed them to understand the tensions and avoid flaring them as they implemented the reform project. 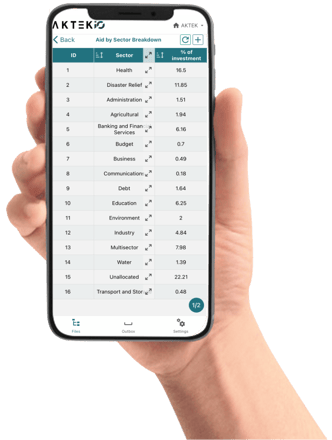 With AKTEK iO, they visualized relationships between different stakeholders and quantifiable attributes like power, engagement, level of openness to a conversation, etc. They mapped on Action-Perception matrices to develop better-informed and conflict-sensitive engagement plans.

Using AKTEK iO's mobile app, they could also keep the information updated in nearly real-time, changing data on their stakeholders after each meeting and sharing it with the members of their organization that needed to access it.

I manage the relationship with clients and strategic partners in LATAM since we onboarded our first local client. I'm a problem solver, eager to help our users optimize their decision-making process powered by our end-to-end software AKTEK iO.

Making sure that data is available when and where it is needed is imperative for teams working in fast-changing environments. ...
Start Reading
Laura De La Hoz Apr 19, 2022 1:33:25 PM 2 min read

The Background In early 2018, we began to work with one of Colombia's largest companies (Fortune 500) in the extractive sector ...
Start Reading